Home About HGI > Success Stories Sitemap
prestige premium free 390JAC-136 [Married woman during pregnancy] × [Sleeping SEX] This time Arasaa-chan is a celebrity married woman! - I've never had an affair, but I decided to play with my affair! - She is a celebrity married woman who seems to be living a happy married life while being a teacher in a piano class, but the stress and sexual desire suppressed in her home is more than anyone else! - To relieve her daily anger! - Explosive Iki with the first affair date & NTR sex! - It is a superb body that is easy to get pregnant during pregnancy! - !! - [Arasaa-chan. - 7th Asami] 200GANA-2698 Seriously Nampa, first shot. - 1812 Picking up fashion students in Harajuku! - SEX from the underwear check from the love talk brought to the hotel! - Hatachi's firm E-cup boobs and prickets! - Ochi ● Po IN has a cute pant voice! 534IND-062 [Individual shooting leak] Raw squirrel video leaked with a certain famous company's office lady _ Sexy knit beauty and daddy activity with full view of the valley 328HMDNC-486 [Floating adult sex appeal] Model-class beautiful breasts Beautiful skin Slender young wife 32 years old A handsome guy I met at a joint party takes away An adult woman's too sweet nasty cum shot Gonzo one night outflow H4610-ki220609 Hiroko Tono

Problem:  60 gallon per minute leak between liners in a storage pond.

HGI’s leak detection work at a Dow chemical plat is a great example of one of many leak location success stories…  Another company initially surveyed the Dow Chemical pond with up to six people in the pond listening for leaks.  Seventeen leak locations were provided to DOW for repair.  Following repairs, leak rates did not decrease from the initially observed 60 gallons per minute (gpm).  The same company surveyed the pond for a second time, but  the pond leak  rate remained the same after repairs were made.

Two HGI field geophysicists completed the survey without ever having to enter the pond.  At the successful completion of HGI’s survey, three leak locations were provided to DOW for repair.  After repairs the leak rate decreased from 60 gpm to 0 gpm. Following this success, HGI was  requested to survey an adjacent pond; following leak location identification and repair, the leak rate in this pond decreased from 45 gpm  to 0 gpm.

Problem: A monitoring system was needed to alert for leaks during containment, treatment, and retrieval of high-level mixed radioactive waste stored in single and double shelled steel tanks. 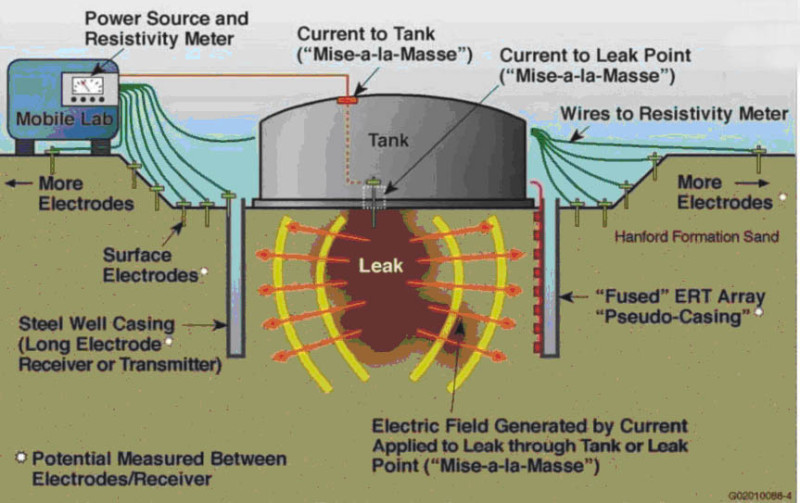 The Department of Energy (DOE) oversees the containment, treatment, and retrieval of high-level mixed radioactive waste at the Hanford Nuclear Site in Washington State.  Single-shelled & double-shelled tanks provide temporary storage before final treatment.  Monitoring tanks before and during the retrieval processes is critical.

HGI’s electrical geophysics monitoring program has been in place since 2004, covering multiple storage tanks and tank farms on the Hanford Nuclear Site.  The monitoring program takes advantage of changes in electrical resistivity that will occur should a tank leak.  HGI went through a rigorous testing and competition phase before earning the opportunity to provide leak detection monitoring at the Hanford Nuclear Site.

Why did HGI win out at Hanford for leak detection and monitoring?

The themes of the field study (contest) were:

HGI competed against several national laboratories at a mock tank on the Hanford Nuclear Site. Based on the criteria set forward, HGI was awarded 1st place by the tri-party agreement comprised of the EPA, DOE, and WA State Ecology Department.  During fiscal year 2006, a geophysical investigation was performed at the S Tank Farm to demonstrate the use of electrical resistivity methods to locate and map liquid injected into the tank farm vadose zone as a part of a simulated storage tank leak and to identify and map regions impacted by past leaks and spills.  The main purpose of the injection was to test the capabilities of the HGI High Resolution Resistivity – Leak Detection and Monitoring (HRR-LDM) method for leak detection and leak quantification within a single-shell tank farm.  The leak injection test consisted of a series of 10 injections where a conductive fluid was discharged into the subsurface using a well near one of the storage tanks.  The HGI HRR-LDM system was used to monitor the changes of electrical properties in the subsurface.  During this blind test, HGI was able to successfully determine when the “leak” event was turned on and off and quantify both leak rate and volume. 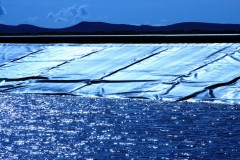