Covers and capping systems have been used in the mining, industrial, and environmental sectors as part of remediation efforts and closure processes for over two decades.  HGI’s cap & cover leak detection surveys provide clients with a more holistic approach to challenges faced during reclamation while maintaining regulatory standards throughout closure operations.  The purpose of covers and caps is to isolate contaminated material and prevent any potential contact with, or spread of, contamination.

Covers & caps operate in many ways, including:

Capping and covers are one of the most common forms of remedial action.  They efficiently manage the anthropogenic environmental impacts associated with the remediation and closure of mining, landfill, and large scale industrial land uses.  The key principal of these structures is to stop infiltration through the contaminated area, mitigating off site migration of contaminants and potentially hazardous fluids.  Water, via atmospheric precipitation or snowmelt, is typically the major environmental medium affecting capped material and site closures.  Sound closure practices are fundamental to minimizing and preventing environmental impacts, and it must be demonstrated that the hydraulic performance of caps and covers meet requirements for current remedial efforts, ecological restoration, and potential future land uses.

Many factors are considered when creating closure cap and cover designs, including contaminants present, the size of a site,  annual precipitation, slope characteristics, and effective placement.  Typically, for hazardous waste sites, multiple layers of material will be used in the cap construction to limit infiltration, including for example, a vegetative layer, a drainage layer, a geomembrane, and a clay layer.  Once caps and covers are placed, it is extremely difficult to determine the covers’ integrity and effectiveness because of their size and construction.  Often, operators will only realize a cap or cover may be compromised when contaminants are detected in monitoring wells or seeps start to form from fluid moving through the waste pile.  Geophysical methods provide an extremely efficient and cost effective cap & cover leak detection technology to survey and monitor caps and covers to ensure their functionality and integrity.    HGI uses the latest geophysical technology to survey and monitor caps and covers to ensure compliance and determine potential weak spots, focused infiltration, thinning regions from erosion, and deep percolation.  There are several geophysical tools available for surveying and monitoring covers, including electrical resistivity, induced polarization, ground penetrating radar, and electromagnetic induction.  Each of these methods measures some aspect of the electrical properties of the subsurface, which are influenced by soil saturation and ionic strength of the pore water. Electrical resistivity and induced polarization have the distinct advantage of looking through the cover and determining  whether infiltration is affecting the waste below it. 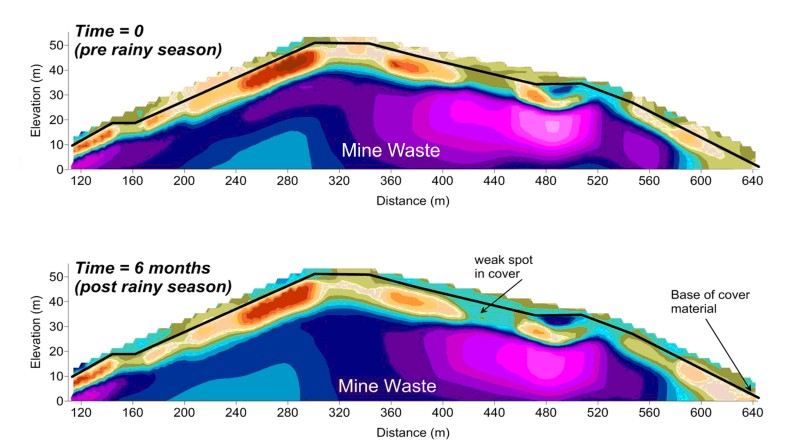 The example above shows results from an electrical resistivity monitoring study of a mine waste site with a thick soil cover. Several years after the cover was placed, significant amounts of acid rock drainage (ARD) was still emanating from the pile and the covers’ integrity was in question.   Facility operators were interested in understanding if the cover was failing to prevent infiltration or whether there was another source (e.g., simple drain down of residual water or an influx of groundwater). HGI set up a monitoring network, consisting of a series of electrical resistivity profiles across the site, to measure changes before and after the rainy season,.  Electrical resistivity profiles before the rainy season shows a fairly highly resistive and intact cover. After the rainy season, the cover absorbed moisture and performed as expected. However, from our post-rain season resistivity survey a weak spot (about 100 feet across) was evident in the resistivity profiles.  The weak spot that had developed during the rainy season was allowing precipitation to infiltrate to the waste below and cause an increase in ARD.  However, given the small area of focused infiltration at the weak spot, there was doubt that this small area was the sole cause for the ARD problems.   A mass balance was calculated and this suggested that the cover was not the only culprit for the sustained release, and that other sources were likely the probable cause of the ARD.  Based on the time-lapse resistivity survey and the mass balance calculations, HGI was able to put to rest the notion of a failing cover as the sole source for infiltration . A more likely scenario for water penetrating the pile was from groundwater influx. When sound geophysical principles are applied in combination with hydrologic intuition, significant problems can be solved.